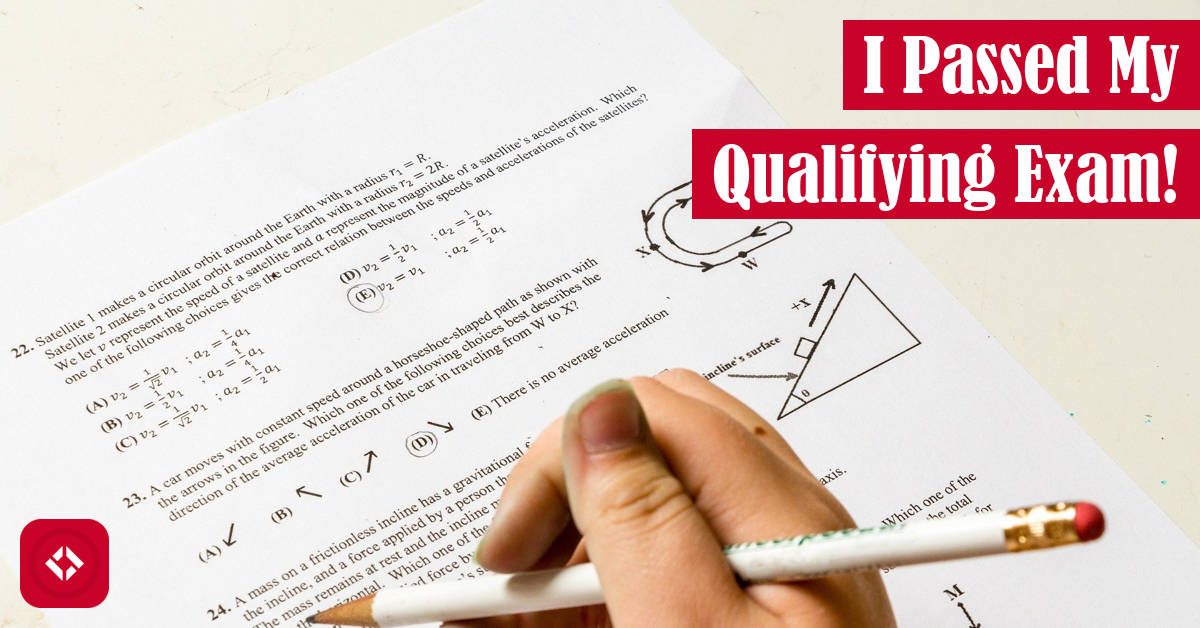 After over three years of grinding toward a PhD, I have finally passed my qualifying exam. It’s time to celebrate!

What Is a Qualifying Exam?

For people who choose to pursue a PhD, there is a fairly common practice which involves three checkpoints: qualifying, candidacy, and defense. The first checkpoint is the qualifying exam, and in my experience it is held at the beginning of the second year of the program.

These types of exams come in many, many forms including traditional pen and paper exams, take home exams, essays, and oral exams.

Personally, I have yet to figure out the purpose of the qualifying exam, but different folks have different takes. For example, Stephen L describes the purpose like this:

Qualifying exams are used as a determinant of a student’s ability to think coherently and of their knowledge in a research field. It involves a number of courses and oral examinations that test the student on a department’s field of study, and a student’s research area.

Are Qualifying Exams a Waste of Time?

I see them more as a gate to make up for poor recruitment and teaching, but that’s perhaps a subject for another time.

My History With Qualifying Exams

As some of you may know, I am actually in my fourth year of my PhD. That is obviously incredibly late to be taking a qualifying exam, but I have a bit of a reason for that.

First, at the start of my third year, I switched departments. At that point, I had already taken and failed a qualifying exam in computer science. The format for that exam was a bit more traditional: three in-person exams reflecting finals for the three core courses in the department. As I’ve mentioned before, I had just barely failed that exam, but I wasn’t exactly feeling good about myself. I felt like I was ready to keep moving through my program, but my department didn’t think I was ready based on the results of a single exam. As a result, I jumped ship to a new department.

When I switched from Computer Science and Engineering to Engineering Education, I had to start the process over again. In other words, I had to take the three core courses in the new department before I could take the qualifying exam. To make matters worse, my new department only offers the qualifying exam once a year in August. As a result, even though I had taken all of the core courses by January, I had to wait until August to demonstrate my knowledge of those courses.

At any rate, the format of the qualifying exam in the new department was very different. In short, I had to complete an essay for each of the core courses over the span of two weeks. These essays were graded on a rubric by a pair of faculty members who had to come to a consensus on whether or not I passed. If I had failed any of the questions, I would have had to take those portions of the exam again in a year. In addition, I had to complete an oral exam which involved critiquing some NSF proposals. The entire process took about a month from start to finish, and I just received my results earlier this week.

To be quite honest, I feel really, really good! I’ve been grinding away on this PhD since 2018, and I’m just now finishing my qualifying exam. This feels like a really long time coming, and I’m actually pretty proud of myself.

Overall, however, I am very excited to have passed. I just wish this gate didn’t exist in the first place.

Now that I have passed my qualifying exam, the process of finishing up the PhD program has accelerated quite a bit. For example, I will be done taking classes next semester. In that same semester, I am planning to complete candidacy. At which point, I can start conducting my dissertation research. Overall, I am hoping to be done with my PhD right on time: Spring 2023. That was the original plan, and I’m sticking to it!

With that said, I think that’s all I have for you today. As always, I’ll keep writing about my journey until that journey is eventually over. In the meantime, why not check out some of the other things I’ve had to say about my this journey:

Otherwise, thanks for sticking around! I appreciate it.