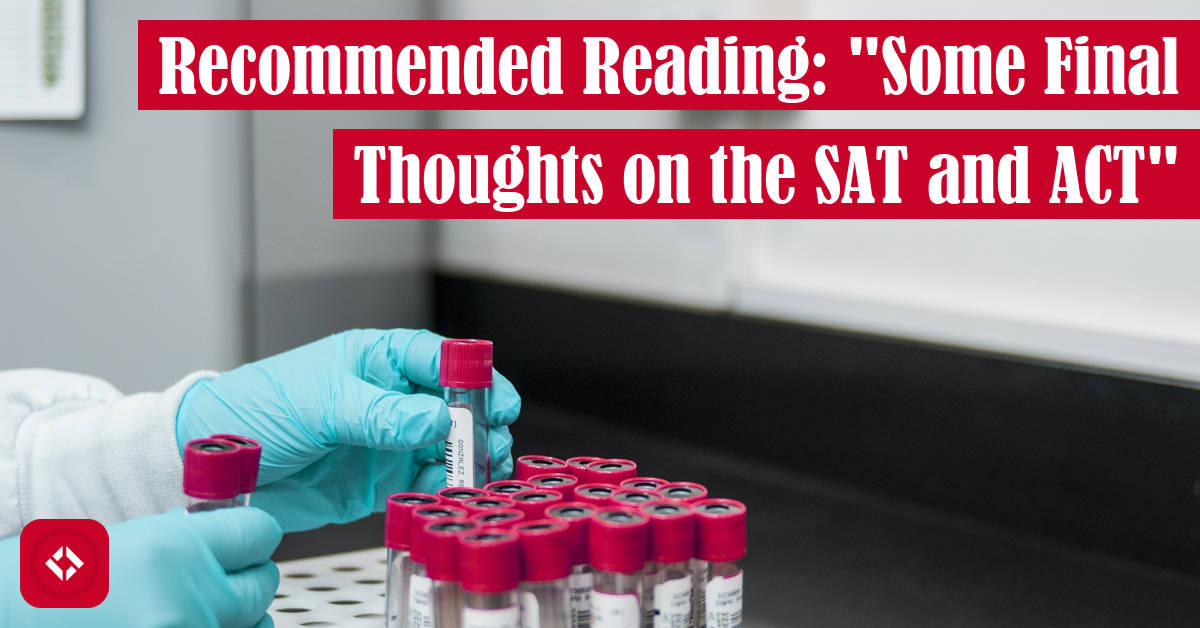 In the second installment of the Recommended Reading series, I figured I’d share a blog from higher education. This one, in particular, talks about the role of standardized testing in higher education and why it is fundamentally flawed. It’s called “Some Final Thoughts on the SAT and ACT

” by Jon Boeckenstedt, and I think y’all should check it out.

How I Found This Article

As is often the case, I found this article while browsing Twitter. Specifically, there has been quite a bit of discourse lately related to standardized testing, likely due to many universities dropping the requirement since the start of the pandemic. In particular, I saw this pretty data viz fly across my screen which ultimately led me to the article we’re going to talk about today.

As you can see, the original poster was quote tweeting an argument that the ACT and SAT are “good, actually.” In response, they shared a plot of income brackets versus ACT scores. The trend is clear: money buys better test scores. As someone pursuing an education-related PhD, of course I was baited into reading more. This led me into the replies—all as amazing as the last:

Of course, once you get passed the memes and snarky comments, you’ll actually find the author of the original data visualization. While I don’t think Jon explicitly shares the source, several folks do:

Having gone this far to find the source, I figured I might as well take a look. Needless to say, I recommend you take a peek as well!

In Jon’s article, he kicks things off by stating that he has wasted far too much time explaining the problems of standardized testing over and over again. As a result, he puts together an article that captures all of the main points that folks make about the importance or value of standardized testing. Then, he meticulously picks each of the arguments apart.

The first argument Jon deconstructs is actually where the pretty plot from the original tweet originates. As you can probably imagine, this argument is along the lines of fairness: since everyone takes the same test, it must be fair. In reality, like most things related to meritocracy, these exams are far less fair than they appear. Jon shows this by plotting income distribution against ACT scores. The result is a fairly obvious finding: money buys test scores. Of course, it’s not just money that has an impact on test scores; it’s also ethnicity.

After Jon tackles fairness, he also examines a variety of other arguments. For example, he mentions the “diamond in the rough” theory which argues that disadvantaged folks can escape their situation by passing one of the major standardized tests. In total, Jon deconstructs “about eight or ten tried and true aphorisms” ranging from the need for testing metrics due to grade inflation to testing “measures native ability.”

Finally, Jon wraps up the article by proposing a solution that’ll get him to “stop talking about standardized tests all together.” As far as I understand, his solution involves eliminating the publication of scores, so institutions don’t have to report them for ranking purposes. Then, universities can begin to admit folks with lower test scores (if they choose to use them) without risking their ranking.

With all that said, I don’t know many of the acronyms that Jon uses or how they relate to higher education. Perhaps that’s something I should brush up on if I plan to do any work related to equity.

Now this is the point in this piece where I get to share a bit about why I like Jon’s work.

First, as you might already know, I have an incredible soft spot for data visualization. It’s weird because I generally don’t care for quantitative data analysis, but data visualization allows you to be a bit more interpretative. Not everyone is going to see the same thing, and this allows us to take a deeper look at the phenomenon. In other words, I really like Jon’s data visualization.

Second, I love just about any work that is willing to critique existing systems. Folks who write critical work are often labeled as whiners, but I find that type of work to be incredibly important. How would we ever progress as a society if there weren’t folks willing to push back on the status quo? In other words, I really like Jon’s work because he gets at an issue that I think a lot of high school students grapple with: “why does my future depend on the score of a single test?” This sort of thing will always remind of that principal’s office scene in Interstellar:

Beyond that, I like this work because it’s topical. We’re in a pivotal moment in education. Institutions could really abandon standardized testing and move to a more equitable model. The hopeless optimist side of me really hopes that’s what happens, but I suppose we’ll see.

As someone who works in education, I’m constantly reading education-related material. That said, very few have been has impactful as the work by Jon. As a result, I have to ask: do you know of any articles that compare? If so, head over to our Discord

and give it a share. I’d love to read them!

If Discord’s not your thing, but you still want to contribute to the community, head over to my list of ways to grow the site. There you can find likes to the newsletter as well as my YouTube channel.

Otherwise, thanks for sticking around! I appreciate your support.