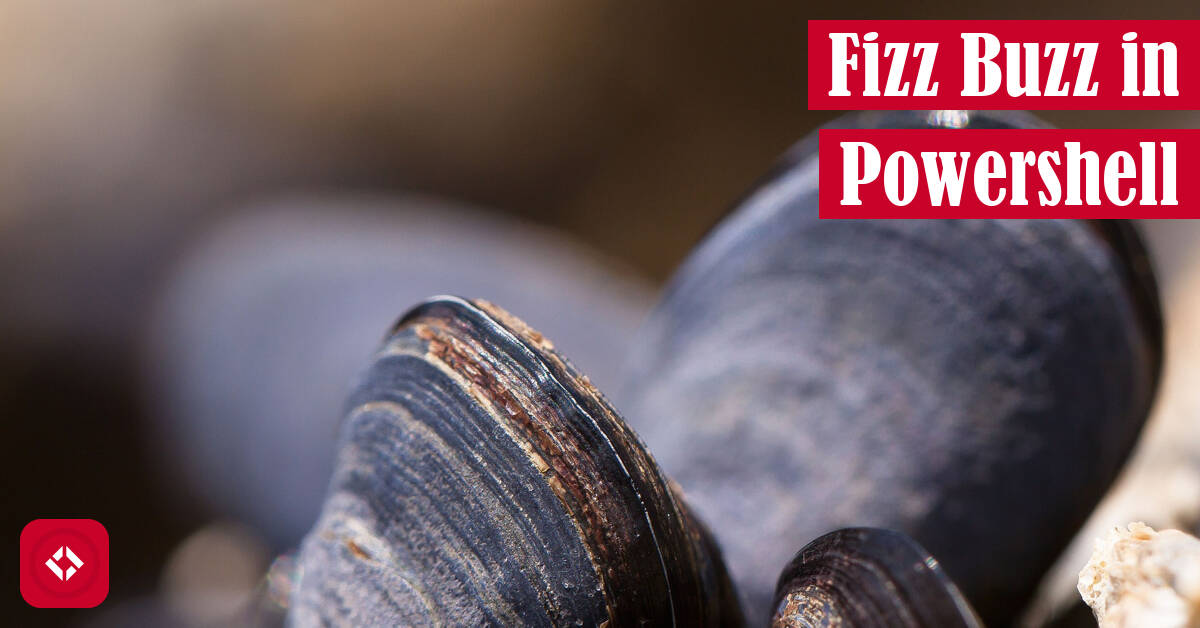 If you don’t know anything about PowerShell, we recommend checking out Hello World in PowerShell. At any rate, let’s dive in!

1 Fizz Buzz in PowerShell
1.1 No More Anecdote
1.2 What’s The Problem?
1.3 Where to Start?
1.4 Cleaning Up Our First Draft
1.5 Finally, A Script!
2 How to Run the Solution
3 Sample Programs in Every Language

I’m going to start with a little anecdote before getting started on the meaty portion of this article so feel free to skip ahead to No More Anecdote if you’re just not that interested ? I completely understand.

I realized about two weeks ago that I hadn’t written anything in a while and had a bit of a desire to write, with nothing coming to mind on what to write. I was also dealing with a nagging feeling in my brain of “Should I really write another article?” and if I did “Who really cares if I write another article? There are countless others writing about the same stuff”, among other negative thoughts.

I went to a get together with some of my best friends to eat tacos, drink some tequila, and just enjoy each others company. While I was there, one of my more technically oriented friends came up to me and we began talking about my work, playing Overwatch, and other nerdy things, when he mentions to me that he enjoyed reading my past articles. While he may not be a currently active developer and that some of the stuff goes over his head, I’ve “got a knack for it” as he said.

Tron that are heavily requested by the user base. It was enough to remind me the whole reason I started writing these is for the off-chance that someone like that would enjoy my writing and possibly get them more interested in programming, learn something new, or simply enjoy the read for the sake of reading something interesting.

In the end, I’d like to say thank you again to that friend of mine for the encouraging words, as I probably wouldn’t have had the motivation to start on this without them ?

And now we’re off to the juicy bits of the article! ? If you’re unfamiliar with the Fizz Buzz

interview problem, it’s a relatively simple problem that is adept at testing your knowledge and fundamental understanding of a given programming language as well as showing the interviewer what kind of developer you are.

For example, do you prefer to toss a bunch of things at the wall and see what works and whittle away the excess? Or do you prefer to lay out a plan for the program before you even write some code? If you’d like more information on the things interviewers can glean from a Fizz Buzz solution, feel free to check out this article

The actual problem was (from what I can tell, please correct me if I’m wrong) initially put forth by Imron Ghory over on his blog

and it was based on a “group word game

for children to teach them about division.” While there’s a number of different ways to word this problem, here’s the wording we’re going to be working with:

This means there are a few things we need to keep in mind or consider:

Well, this is where it varies for everyone. Depending on how you tend to work as a developer, your entry point will vary. Personally, I’ll be starting by creating the for loop that will iterate through all the numbers we need to analyze. This starts us off with something like the following for PowerShell:

This will get us a starting point of outputting every number from 1 to 100. Now we should start putting in some if statements to determine if $x is a multiple of 3, 5, or both. As is the case with most modern programming languages, PowerShell has a modulus

operator that will return the remainder of the division between two numbers.

For example, doing Write-Output (25 % 5) would output 0, since 25 divided by 5 has no remainder. This also happens to mean the first value is a multiple of the second, which we can use to determine the multiples of $x. When I first wrote this script, my solution looked like so:

Cleaning Up Our First Draft

While this works, it’s a bit clunky and doesn’t allow for us to easily modify it in the future if we want to add cases other than being a multiple of 3 or 5. I hadn’t quite realized this until I went looking for more information on this problem and found a video

by Tom Scott. He pointed out that you could easily account for future adjustments by combining the output as a single variable for each number.

While he used JavaScript, the solution should be easily understandable and looks like so:

As you can see, he creates the output variable for each iteration of $x and depending on the multiples, adds or replaces values to that variable. Then, in the end, he outputs it to the console using console.log.

Translating this to PowerShell, we get something like so:

At this point, we have a working solution to the Fizz Buzz problem written in PowerShell. If you were to copy and paste it into a terminal you’d get something that looks like this:

Now, since this is PowerShell, it’s no fun just having a for loop that we need to copy paste. No, we need a script! ?

I created a file simply titled FizzBuzz.ps1 and got to work by adding the standard goodies at the top of a PowerShell script:

Since I was initially writing this script for the sample programs

repository I contribute to, I knew I wanted to support more than going from 1 to 100. Instead, I wanted users to be able to provide a minimum and maximum parameter that would let them modify the output. This simply means adding two parameters to the param () field like so:

The Mandatory and Position attributes tell PowerShell that the parameters have default values and that they aren’t mandatory, and the position attribute makes it possible to do something like .\FizzBuzz.ps1 0 75 to adjust the min and max without having to specify the parameter names. Then, with some minor changes to the for loop, we have our finished result

from the repository (or copy/paste the code from above ?), and then execute it.

NOTE: If you have a secure Execution Policy, you’ll have to set it to unrestricted before executing this script.

And, there you have it! We’ve successfully written a program to perform the Fizz Buzz algorithm in PowerShell.

If you liked this article, don’t forget to give it a share. Also, remember that you can contribute to this series by dropping your suggestions in the comments or forking the GitHub repository

Another geek ? on the net who's addicted to coffee ☕, and I mostly work with Node.js, Java/Kotlin, and PowerShell.