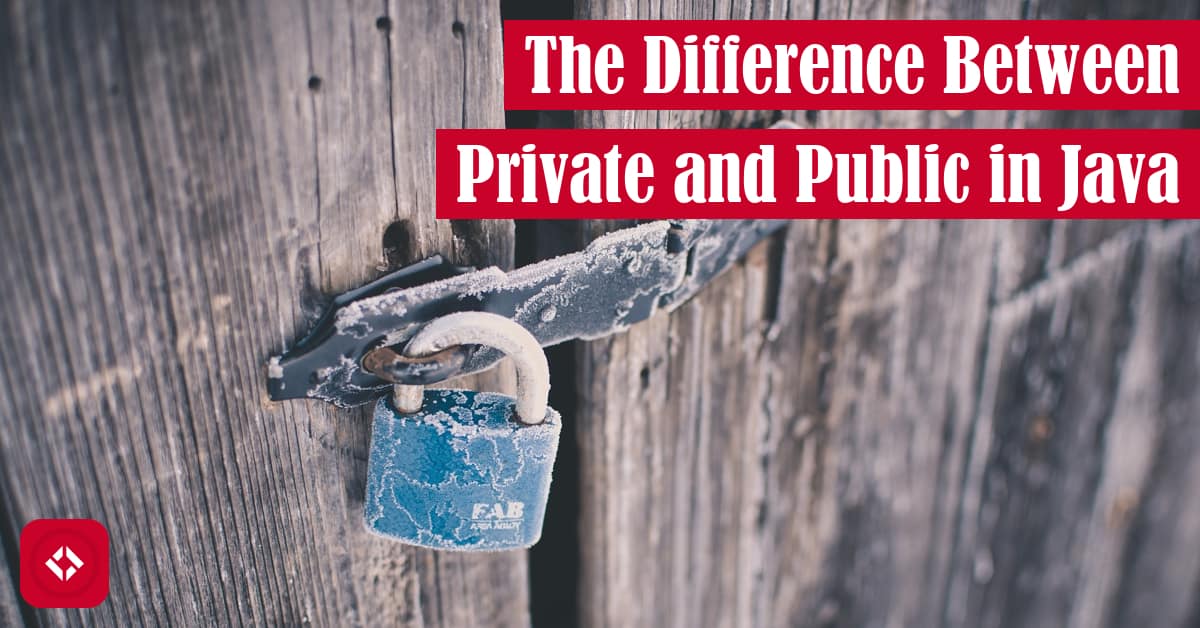 As I was writing my first semester of teaching reflection, I got the idea to kick off a series of student questions called Coding Tangents. In this series, I’ll be tackling student questions with clear, easy-to-follow explanations that demystify common programming language syntax. In particular, I’d like to tackle the difference between public and private in Java today.

Often times when we teach Java, we’re stuck leaving a lot of the syntax as a mechanical process. In other words, we tell students that keywords like public, static, and private will be explained to them later. In the meantime, they just have to trust that we will actually explain those concepts later.

One of these pieces of syntax that almost always gets left for a later discussion is private vs. public. These keywords are known as access modifiers, and we’ll dig into them in this article.

But first, let’s take a look at an example of some code that is almost certain to raise some questions about access modifiers:

In order to teach Java, we’re often stuck introducing the language using these horrible five lines of code. After all, this is the bare minimum required to get a Java program running.

As a result, we’re often forced to tell students something along the lines of:

Of course, this line of reasoning leaves a lot to be desired if you’re a new student. For example, what do any of those four outer lines do? What’s public? How about static, String[], or System.out.println?

At this point, let’s talk about access modifiers at a high level.

In Java, access modifiers are a way to help us from stepping on our own feet. In general, they’re used to set some level of access to a class, method, or variable.

For example, if we want to model something from the real world (say a car), there are certain aspects of that object we probably don’t want to expose to the public (say individual control over the wiper blades). Perhaps under the hood, the wipers are individually controlled, but we’ve built our system such that the switch given to the user has encapsulated that behavior. In other words, both wipers move together as expected.

Had we chosen to expose individual control over each wiper, we may find that many users accidentally break the wiper functionality. After all, if the wipers aren’t perfectly synced, they may smash into each other.

That’s the high level idea behind access modifiers. We use them to expose or hide certain functionality to improve the overall user experience.

At this point, a lot of students will start thinking that access modifiers are some way to make code more secure from hackers. While this is largely untrue, there is some merit in the argument. Sure, nothing is stopping someone from using a feature like reflection to access private fields and methods. That said, access modifiers can help protect the average user from corrupting an object’s state.

Think about the windshield wiper example. When we turn on our wipers, we expect both of them to move at the same speed. Without restricted access, we could change the default speed of one of the wipers. Then, the next time we’d go to turn on the wipers… BAM! To avoid that problem, we encapsulate (or hide) the fact that we have two individual wipers in a single exposed (public) method.

Encapsulation is the art of reducing a complex state down to a set of exposed behaviors. If I were to ask you to throw a ball, you certainly wouldn’t start by requesting a set of matrix transformations for the rotation of your arm. You’d just throw the ball. That’s the idea behind encapsulation (and abstraction).

In this example, we can use access modifiers to specify which behaviors are exposed. For example, we’d probably want to allow users to access the throw command but maybe not the rotateArm or pickUpBall commands.

Now that we’ve tackled some of the misconceptions, let’s get into the syntax.

In Java, there are actually four access modifiers: public, private, package-private (default), and protected. Each keyword offers a level of code access given by the following table:

In other words, we can rank the keywords in order of least accessibility:

For the duration of this tutorial, I will not be exploring the package-private or protected keywords as they’re a bit more nuanced, but I figured they were important to mention.

Classifying Actions as Public or Private

Using the ball throwing example from before, let’s try to figure out which access modifier would be appropriate in various situations:

Let’s say that the high level functions rely on some underlying state of the system. For instance, throwing a ball relies on knowing information like the strength of gravity and the properties of the ball. If someone were somehow able to access the lower level actions, they could potentially manipulate these basic assumptions of the world.

Using the setGravity command, I could tell you that gravity is actually twice as strong as you think it is before telling you to throw the ball. At that point, you’d update your model of the world before significantly increasing the force of your throw to accommodate for the change in gravity. However, in reality, gravity hasn’t actually changed, so instead you overthrow the ball.

This scenario is often what happens when we expose lower level functionalities that don’t trigger automatic updates of dependent properties. In many cases, systems are very complicated, and changing one underlying parameter results in the failure of the system. As a result, we try to encapsulate functionality to cover all our bases.

Up until this point, we’ve been talking mostly about the philosophy of access modifiers, but what are the real world consequences and how do we actually use them? To help clarify those questions, let’s take a moment to write some of our own classes which try to demonstrate the practical differences between public and private.

Now that we’ve seen some high level explanations, let’s dig back into our Hello World example.

To make things a little more interesting, let’s wrap the print in its own private method:

If we try to run this solution, we’ll notice that the behavior hasn’t changed at all. That’s because private methods can be used in their own class. Outside HelloWorld, however, no one knows printHelloWorld() even exists. In fact, we could try to call the method directly from another class in the same folder, and we’d find ourselves with an error:

As we can see, we’ve hidden away the printing functionality, so that it can only be used by the HelloWorld class. If for some reason we made the printHelloWorld() method public, we could run it just fine.

Now, let’s take this concept a step further by actually implementing the windshield wipers in Java (at least at a high level). To start, we’ll make a car class that has a private method for one wiper and a public method for both wipers:

Here, we’ve created a Car class that stores a private array of wiper states. For each wiper, their state is either on (true) or off (false). To turn a wiper on, we’ve written a private method that lets you turn on a wiper by its index. Then, we bring all that together with a public method that iterates through all the wipers and turns them all on.

Now, ignoring the realistic problem here which is that the wipers are being turned on in series, not parallel, we have a pretty solid solution. If someone were to instantiate a Car, they would only be able to turn on all the wipers at once.

Fun fact: the user doesn’t even know how the wipers are implemented, so we have full control to change the underlying architecture at any time. Of course, we still have to provide the same functionality, but how we get there is up to us. In other words, we could potentially change the wiper array to store integers. Then, for each wiper, the integer would correlate to speed.

Now, why don’t you try expanding the class yourself. For example, I recommend adding a method to turn off the wipers. You may want to then write a new private method for turning off individual wipers, or you might find it makes more sense to refactor the turnOnWiper method to take a boolean as well. Since the user never sees those methods, you have full control over the underlying implementation. Happy coding!

Hopefully this helps you understand the difference between the private and public keywords, and why we use them. If not, I’m open to any feedback and questions you may have. Feel free to use the comments below to start a bit of a dialogue. And if this helped you out at all, share it with your friends. I always appreciate the support!