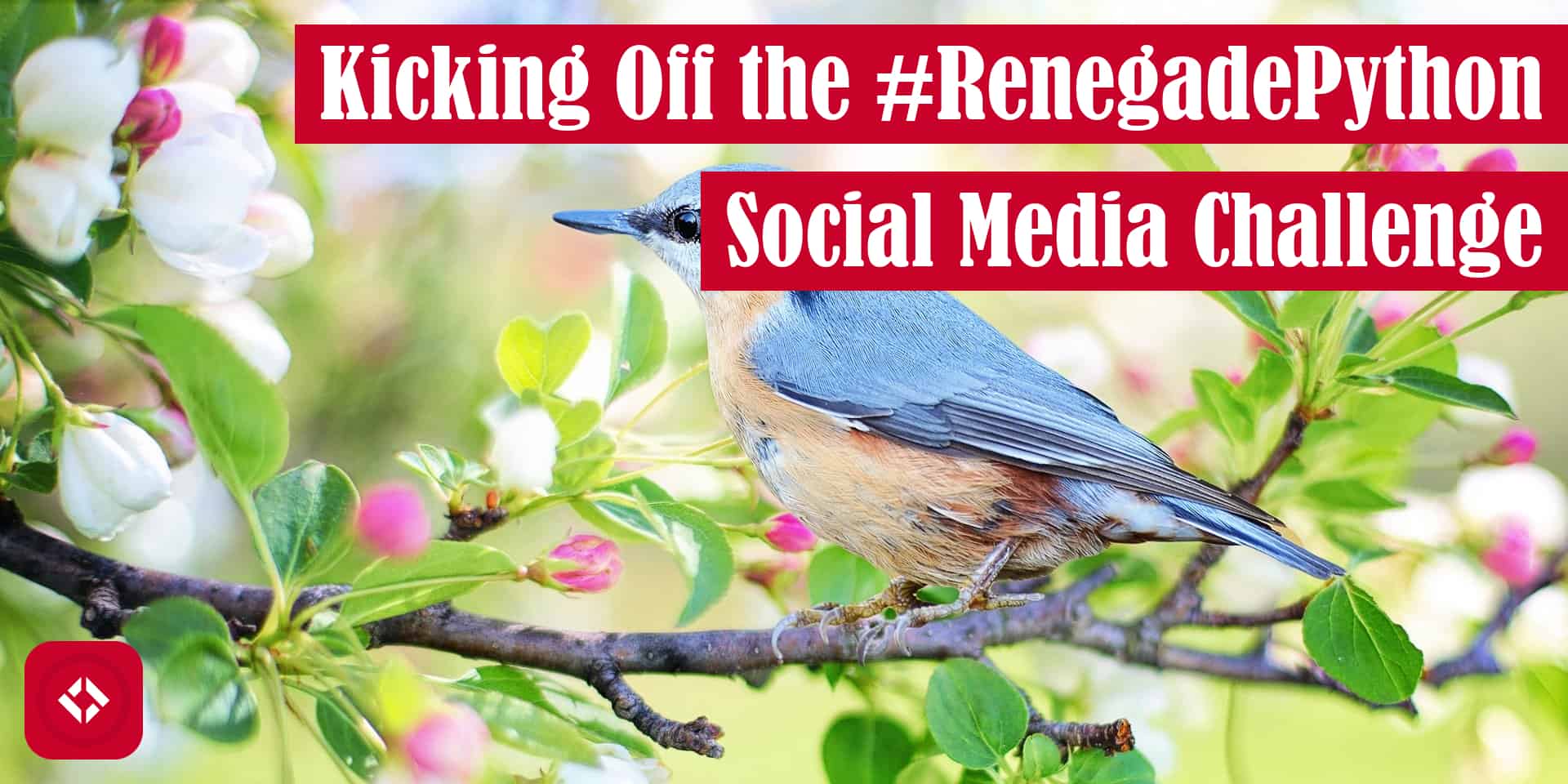 Amidst my huge 2020 website overhaul, I ended up removing comments from my site. While that’s going to result in quite a few continuity errors, I felt it was the right decision for my website. Now, I want to shift comments away from my blog and into the social media community with a new hashtag: #RenegadePython.

If you’d like to be a part of this social media challenge, head on over to my list of articles which contain challenges. Found one that you like and create a screenshot of it using Carbon

As many of you know, I maintain a How to Python series which contains over 30 articles now. Over time, I began supplementing that series with additional content. For example, I added a performance section once I learned how to compare Python snippets. Then, I started adding my own YouTube videos

as visual resources. Eventually, I supported challenges which extend each concept a bit further.

Of course, it’s impossible to do the challenge if I’ve disabled comments. As a result, I had to think about different ways we could continue to interact. For example, we still have YouTube comments. I suppose we could work on the challenge over there.

Then, I realized that it might be fun to start a social media challenge. I don’t expect it to take off, but I thought it would be fun as a small community building opportunity. That’s when #RenegadePython

To be honest, I wanted #RenegadeChallenge

, but that’s already been snagged by a TikTik dance challenge. As a result, I chose the next best thing. Now, if you head over there, you’ll see a collection of Python code snippets written by yours truly. Feel free to take a look!

The cool thing about putting together a social media challenge is that it has a chance to go viral. In other words, all I have to do is continue publishing these articles with interesting challenges and my responses. Eventually, someone will see them and give their own take. If I’m lucky, other folks will join in!

If you’d like to get involved, hit up the challenge tag on my site. There, you’ll see dozens of articles which feature some sort of coding challenge. Pick one and dive in!

One of my favorite challenges right now is the Mad Libs challenge on my string formatting article. Essentially, I ask you to put together a program which can run like Mad Libs. There are really no restrictions beyond that. Here’s my simple solution if you’re interested:

If you’d like to create a cool screenshot like this, use the popular source code image tool Carbon

. Once you dump your code in the window, you can customize how the code actually looks by picking a theme and background color.

Once you have a nicely formatted snippet, you can actually tweet about it directly from the Carbon website. Just don’t forget to tag it with #RenegadePython!

If you’re having trouble finding the challenges, know that I plan to aggregate all the challenges into a larger list-like article—and possibly a GitHub repo—in the future. For now, though, you’ll have to settle for this.

Over the next couple weeks, I’ll be working through all my old How to Python articles to come up with solutions to the challenges. As I do that, you can find my solutions on Twitter.

Once all the current challenges have solutions, I’ll be looking to write challenges for all the Python articles that don’t have them. At that point, we’ll have a fully fleshed out Python series.

If there’s a demand for it, I might even make a repo similar to my Sample Programs repo which archives all these code snippets. I think that would be pretty cool!

In the meantime, you can help grow this social media experiment by contributing your own solutions. Hopefully, each challenge is difficult and open-ended enough to keep the solutions interesting—at least that was my goal!

Well, there’s not much else to say but get out there and make some snippets. I’m interested to see how y’all solve some of these problems!

In addition, you might get some value out of these resources from Amazon (ad):

Finally, check out this list of ways you can support The Renegade Coder. In it, you’ll find information on how to hop on my newsletter as well as how to become a patron.

If none of that interests you, thanks for stopping by! I appreciate the support.