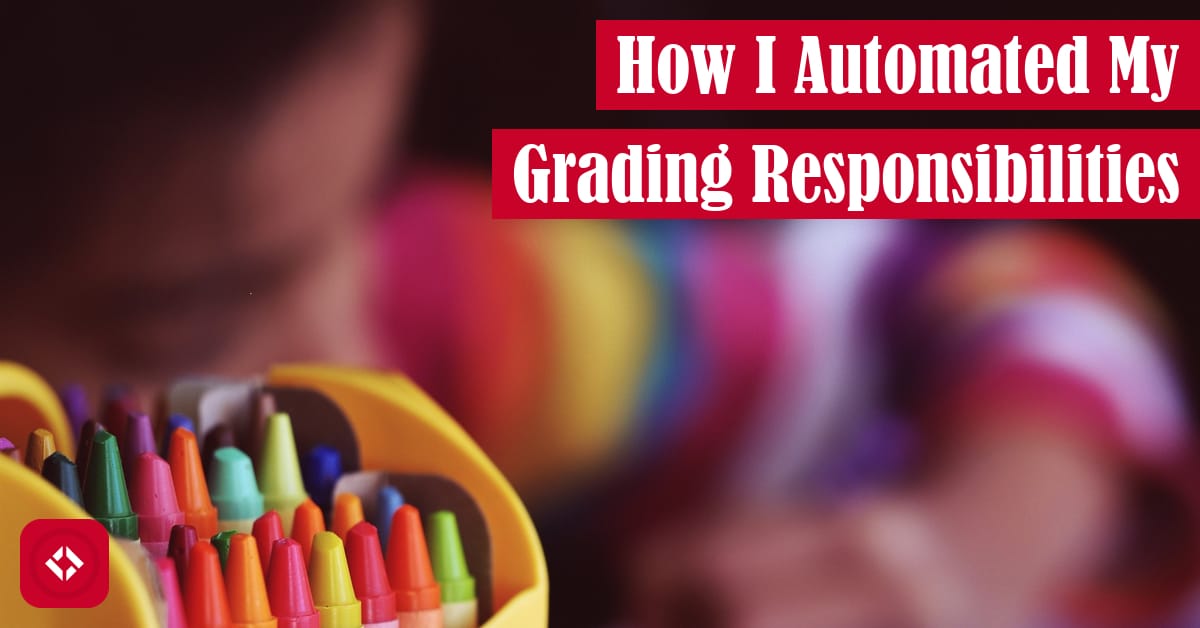 Since I started teaching, I’ve been trying to find ways to automate my grading responsibilities. After all, it’s super time consuming, and I don’t find it to be extremely helpful to the students. Every minute I save due to automation goes back to providing quality feedback, focusing on my teaching, and improving my mental health. Who could say no to that?

I’ve mentioned my grading responsibilities a few times in this series, but I figured it wouldn’t hurt to outline them once again.

In addition to teaching, I’m responsible for grading 12 projects, 14 homework assignments, 14 labs, and 3 exams a semester. Multiply all those numbers by 40, and that’s the total number of assignments I grade over the course of a semester. As you can probably imagine, it’s a huge time sink outside of the classroom.

To speed things up, I’ve tried to find ways to automate grading. Perhaps the largest time saving opportunity is the projects which can take about 6 hours a week to grade. Unfortunately, that long duration is due to a handful of problems:

As you can see, there are a lot of stringent requirements for projects which can make grading a very time consuming task. To add insult to injury, students have a tendency to not follow directions, so files sometimes have to be edited before they can be executed. Worst case scenario: I have to contact students because they didn’t submit everything.

As someone who is always trying to milk every little bit of efficiency out of every day tasks, I quickly took it upon myself to automate the project grading. To be honest, I just couldn’t imagine completing the following procedure for 40 students without going insane:

After looking at this list, I feel I’ve made the right choice to automate my grading, but what exactly does automation entail? Let’s take a look.

During my first semester, the best option I had at the time for automation was JUnit testing. In any given week, it would take me about 90 minutes to write up a JUnit solution to the project and another 2 hours to complete grading. In other words, I managed to reduce a 6 hour process down to about 4 hours. I’ll take that any day!

Of course, JUnit probably wasn’t the ideal choice. After all, we don’t teach methods until the 6th week, so most of the projects are massive main methods. In addition, students don’t always follow the same naming conventions for classes, so I have to be clever in how I call the main method.

As a result, I ended up writing a pretty complex set of methods to guess at the class names using reflection. For instance, the following method generates a list of class names for brute force reflection:

In addition, since many of the projects leverage the main method and text formatting, I spent a lot of time capturing standard output and writing to standard input. Check out my setup and teardown methods:

Overall, the JUnit solution is pretty clunky, but it got the job done.

While JUnit did save me a lot of time, there were still ways to cut wasted time. In particular, I found that I was wasting a lot of time manually unzipping folders.

To put things into perspective a bit, we use Canvas for uploading solutions which does a bit of file name mangling. As a result, standalone Java submissions end up with their file names ruined. To combat this issue, we ask students to export their solutions from Eclipse as zip files. This helps in two ways:

Unfortunately, I was stuck unzipping 41 files every week. Granted, I did speed things up with 7-zip, but I still had to do that all by hand.

Eventually, I decided to automate this unpacking process using Python and the zipfile library:

In this function, I use tk to open a file selection GUI. From there, I unpack the selected zip file and return the path to the extraction site.

Since the zip file contains zip files, I decided to automate that unpacking process as well:

After that, we iterate over all the zip files, extract them, and place them in a new folder with the students name as the directory name. If we encounter a file that isn’t a zip file, we attempt to fix the name mangling issue before placing the file in a folder alongside all the extracted zip files.

With the extraction process automated, I probably saved myself about 30 seconds a file which amounts to a gain of about 20 minutes. Of course, I’d take that any day.

That said, I felt like there was still more to be done. In particular, I found it really time consuming to do the following:

As annoying as this new process was, it was an incredible improvement over grading by hand. In any given week, I might spend only 2 to 3 hours grading projects. It would be silly to say that all the automation up to this point wasn’t worth it.

However, there are still a lot of manual steps in the process above, so I took it upon myself to reduce the steps once again:

To do this, I extended my Python script to support JUnit testing. At a high level, each solution is graded as follows:

Beyond the hardcoded classpath, this solution will automatically compile the student solution and my JUnit test code, execute the test, and print the results to a file. At that point, all I have to do is scan through the file for student names and their testing report before I can assess a grade.

While the new process is light years faster than any grading I’d been doing last semester, there are still improvements that can be made. For instance, it’s possible to automate the downloading of student solutions. Hell, it’s probably even possible to schedule that process on a server which emails me the testing results at the deadline.

On the other end, it might be nice to create a testing report that just tells me grades, so I don’t take any sort of cognitive load to translate test cases to grades. If that’s possible, it’s probably possible to automate grade uploading as well.

From end to end, we’d have a system which would completely automate student grades. There would be no need for me to take time to assess grades. Instead, I could focus on what I care about which is student feedback. After all, grades are sort of arbitrary metrics. Feedback is what helps students grow.

Also, without the cognitive load from grading, I’d probably be able to build better lecture material, hold better office hours, and give better support over email. That would be the dream!

Recently, I was telling a friend about what I had done to automate my grading, and they had a great question for me:

If you automate everything, how are you going to detect plagiarism?

But, it may be fun to extend the current solution to detect for plagiarism locally. In other words, I could save all the solutions and diff them against each other as I go. That could be fun!

That said, I’ve never been a glutton for punishment. My core values are based on trust, so I tend to offer those same values to students. If I don’t suspect any cheating, I’m not going to go hunting for it. My trust is theirs to lose.

The Power of Automation

Every once in awhile I’ll see a meme making fun of developers who would rather take an hour to write a script to automate a task than spend five minutes doing that task, and I’m so very guilty of that. That said, I don’t think my quest for automation is a bad thing. After all, I always share my solutions to the public.

For example, you’re free to check out all the JUnit test code I use to automate grading for my CSE 1223 course

. For instance, the Projects folder contains all of the JUnit testing scripts. Meanwhile, I recently moved the Python script to its own repo

. Feel free to look around and borrow some of my work for your own benefit. That’s why I do what I do!

Also, I should mention that the Python grading script has gone through a lot of changes since I wrote this article. For example, it now dumps all the grades to a JSON file which allows me to nest parts of the file in an IDE, so it’s easier to scan. With the JSON improvement, I’m able to get a high-level idea of who did well and who didn’t which I use to grade similar scoring assignments in succession.

If you know any teachers who might be interested in automated grading, why not forward this article to them. I’m sure they’d appreciate it! At any rate, thanks for taking the time to read this article.