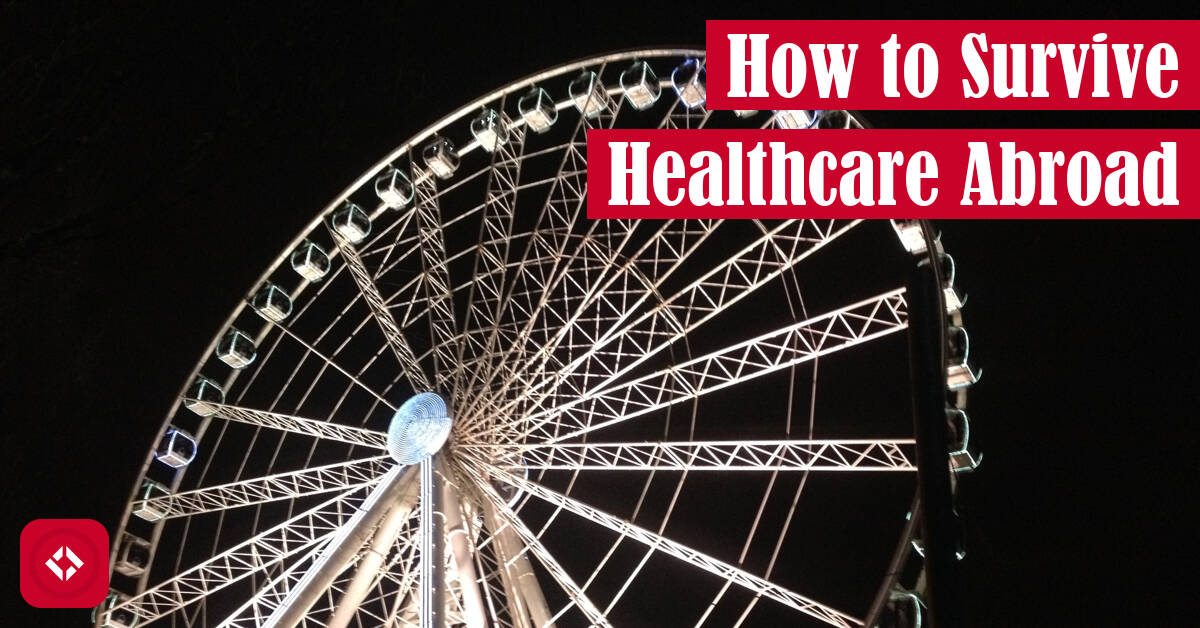 When I was 19, I left the continent for the first time to spend a semester abroad at The University of Manchester. While I didn’t exactly enjoy my trip, I did gain a ton of perspective. Perhaps one of the most important lessons I learned was about healthcare abroad.

As a part of my semester abroad, I spent about a week in the hospital. In this section, I want to dig into that experience.

During that trip, I came down with a rather nasty cold. In fact, I got so sick that I spent about two full days laying in bed. Oddly enough, I was completely fine by the third day. I was feeling so great, in fact, that I ultimately decided to get up and go to breakfast.

Breakfast was served in a cafeteria in my residence hall. Every morning, I would go to the cafeteria and grab my meal card, a piece of plastic with my face on it. As I went through the line, I’d typically grab a couple small pancakes, some bacon—which was more like glorified ham—and something to drink.

When I got back to the table, I began to eat like normal. At some point, I managed to glance down at my arms near the elbows. That’s when I noticed a particularly startling rash running up both of my arms.

Without hesitation, I decided to finish eating and visit a doctor.

As an outsider, I wasn’t exactly sure how to get to a doctor, so I decided to contact my local study abroad coordinator. He said I would have to schedule a doctor’s appointment, but I knew I couldn’t wait that long.

At some point during the trip, I heard that pharmacies—also known as chemists—are able to prescribe drugs over the counter. Naturally, I decided to test that theory by visiting the nearest Boots

Now, I should preface the rest of this story by saying that I was in far worse condition than I believed. In fact, I was probably pretty close to just passing out and dying as I had this odd warrior-like strength that appeared out of nowhere.

When I went to visit Boots, I left in a t-shirt and shorts. For those wondering, England is not a warm place. That said, I wouldn’t say it’s a cold place as temperatures tend to hover between 40 and 60 degrees Fahrenheit. On that day, Manchester was on the colder end of that spectrum

As usual, I hopped on the bus for downtown. Upon arrival, I walked into Boots and explained my symptoms to a pharmacist. Within moments, they referred me to their walk-in clinic a few blocks away.

Instead of waiting for another bus, I found myself hiking over to the clinic which was probably about a mile away. When I got there, I felt oddly at home. As it turns out, England’s clinics are not much different than an emergency room in the United States.

After a bit of waiting, a doctor invited me into their office. Within a few moments, they began poking at my rashes. That’s when the situation became quite a bit more dire.

Naturally, the doctor wanted to run a few tests, but the clinic was very limited in scope. For instance, they were unable to run any blood tests, so they referred me to a much larger hospital: the Manchester Royal Infirmary

To get from the clinic to the hospital, I had to hop back on the bus. Shortly after arriving, I signed in and began waiting.

Some time later, they invited me into triage to get a blood sample. Unfortunately, I had been so dehydrated that they could not physically extract any blood. After three attempts and two different arms, the nurse gave up.

At that point, I decided to grab a drink out of the vending machine, so I could possibly thin out my blood. It was then that I realized how long I had gone without ingesting anything. Once the juice hit my stomach, my body started to crave food.

Luckily, an older doctor arrived and brought me to a hospital bed. He seemed particularly interested in drawing some blood, so I gave them another chance. Within the next half hour, I was admitted for the night.

Upon being admitted, I was moved to a proper room with a bed. Before long, a nurse came in to give me an IV. To do so, she took my hand and placed the IV in it.

When she connected the machine, she noticed that the fluid wasn’t flowing. Unfortunately, that led to an experience of pain that I can only describe as the worst I’ve ever felt. Essentially, she took a needle filled with some innocuous looking fluid, and she placed it in the IV. At that point, she violently injected the fluid as I watched the vein in my hand expand to 2-3 times it’s original size.

As soon as she noted the ballooning of my vein, she promptly massaged the area with her thumb. This brought about a painful sensation unlike any other I’ve ever had. Before long, however, I was fine, and she was able to reconnect the IV for the night.

As it turns out, I apparently had elevated markers in my blood which is why they decided to admit me. They weren’t sure what was wrong, but they suspected some autoimmune disorder. Naturally, I was quite alarmed.

Unfortunately, doctors take weekends off. Since I was admitted on a Thursday, there was a pretty solid chance that I was going to be stuck their through the weekend. After two days of testing, I found myself stuck in the hospital with nothing to do for a couple of days.

When Monday rolled around, I was hoping to be discharged. After all, I was feeling a lot better, and I had other things to do. In fact, I had a ticket to a Manchester United game that Tuesday, so you can imagine my surprise when I found out Monday was a bank holiday. As a result, there were no doctors to be found.

By Tuesday, I found out that the blood tests were inconclusive, so they wanted to run a few more tests which include a chest xray and a sonogram of my liver.

Naturally, I didn’t get my test results until the following day. At which point, I was discharged. For whatever reason, they never figured out what I had. Thankfully, I wasn’t stuck paying those medical bills, but I did miss out on the game.

To this day, I have almost no idea what I had. That said, I do have some thoughts.

For instance, my family visited just a handful of days before I got sick. Apparently, my sister had a sore throat which I presume was Strep. Shortly after they left, I felt like I was coming down with a really bad case of Strep Throat.

Perhaps the Strep Throat got so bad that I developed Scarlet Fever. However, I believe Scarlet Fever is characterized by a rash that doesn’t indicate internal bleeding like mine did, so I’m probably grasping at straws here. That said, Scarlet Fever is a bacterial illness, so the fact that the antibiotics worked makes sense.

As an added wrinkle, Wikipedia

, so I very well could have had it. However, Scarlet Fever is mainly found in children between 5-15. At the time, I would have been 20.

Alternatively, I could have had Henoch-Schonlein Purpura (HSP) as that was mentioned to me in passing at Boots. However, the symptoms don’t exactly line up to what I was experiencing, so I don’t really buy it.

Perhaps, I should reach out to the hospital to see if they have my medical records. At least that way, I can have some closure.

As someone who has experienced a week in a hospital abroad, I think I can shed some light on healthcare abroad. That said, I can only really speak to free healthcare in England and that overall experience.

So, what can we learn from my experience?

In general, I’d say get help as soon as you can. You never know what disease you might have contracted and where it originated. If you got a bug that is atypical for people of your home country, it’s probably a good idea to get help sooner rather than later. After all, your immune system was probably not built for your current location.

Other than that, follow the proper procedures for that country. For me, that meant knowing the procedures ahead of time rather than figuring everything out as I went. If I knew that there was a walk-in clinic, I would have went there first. By the end of the day, I probably traversed half of Manchester just to get some help.

Finally, make sure you get a hold of some close friends and family if possible. Perhaps the scariest part of the whole experience for me was the fact that my phone was low on charge. As a result, I was only able to get a hold of some close friends who relayed the messages to my loved ones. As an added bonus, one of my friends even went the extra mile to get my laptop—thanks, Matt!

I realize at this point that the title of this article is kind of ironic. After all, American healthcare is pretty bad. While the quality of care might be good, the cost is terrible. Perhaps I should be writing more about surviving our own healthcare system.

At any rate, if you have any tips of your own, let me know in the comments. I’d love to here your own horror stories with healthcare abroad. Otherwise, consider subscribing