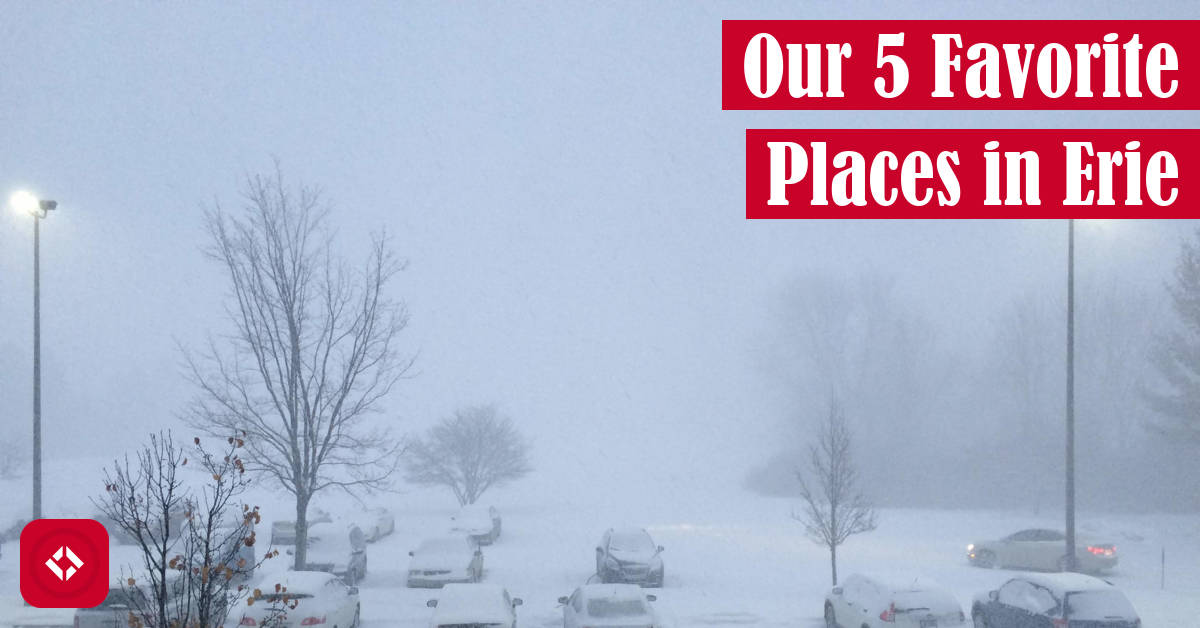 The Life of a Local

As I mentioned already, Morgan and I grew up in Erie. In fact, we both grew up just south of the city in a small town called Edinboro. Naturally, we have a lot to say about this rather small area.

Despite its size, Erie is still a bit of a tourist town thanks to attractions like Waldameer

and the Millcreek Mall

. As a result, we won’t be covering those places. Instead, we’ll chat about some of our favorite places to go as locals. We hope you enjoy it!

Perhaps our all time favorite place in Erie is Art’s Bakery. If we were ever on that part of town, we made sure to stop and pick up a couple dozen cookies. My personal favorite baked goods are the lemon and orange cookies.

In addition to cookies, Art’s offers plenty of other goodies such as pies:

Also, Art’s serves as a pretty solid deli, so you can get cheese and meat as well:

You won’t want to miss this family business owned and operated since 1950.

To be honest, we hesitated putting Presque Isle

on this list because it’s probably the most toured attraction in Erie next to Waldameer. That said, Presque Isle deserves every bit of recognition it gets.

If you’re unfamiliar with Presque Isle, essentially it’s a peninsula that stretches out onto Lake Erie. What makes it so popular is the geographical diversity. In other words, there’s a lot to see from beaches to marshes.

In addition, Presque Isle is a common location for local Erie events

, so there’s almost always something to do.

Personally, Morgan and I love to hike the main trail, but plenty of people come to swim, ride bikes, or roller blade. In fact, we spent one summer exploring Presque Isle while playing Pokemon Go.

If you manage to make your way out to Presque Isle, don’t forget to stop at Art’s Bakery. It’s just around the corner on 26th street toward Fairview.

If beaches and desserts aren’t your thing, we recommend making the trip out to Lake Erie Speedway

, a local eighth-mile race track. According to Google, it’s rated a 4.5 out of 5 which is pretty solid. In general, people seem to be very happy with the various events that happen throughout the year.

In my personal experience, Lake Erie Speedway is a favorite simply because of Crash-O-Rama. Who wouldn’t want to go watch cars, boats, and buses bash into each other?

Beyond that, it’s just a great stadium to visit if you want to support the local drivers. I’m sure they appreciate it.

While we’ve already mentioned Presque Isle, that’s not the only thing you should check out when you’re down by the peninsula. Now, we’re not talking about Waldameer. We’re talking about a local diner called Sara’s.

Now, we should clarify. Sara’s is only available in the summer. If Erie is buried in snow—like it usually is—you likely won’t be able to enjoy this treat.

That said, we almost didn’t put Sara’s on the list because it’s very touristy, but I think there’s a good reason for that. It’s a local icon.

In general, we’re not a fan of the food because it’s a bit unhealthy, but my wife and I still make the visit every summer to soak up some of that childhood nostalgia.

To be honest, we like to leverage Sara’s as a starting/ending point for a long Presque Isle hike. Why not go for a long walk and finish it off with a cold treat at Sara’s? When you’re done, maybe you can head around the corner to Art’s for a goodie bag to go.

. Naturally, this is my own personal pick. While I’m aware the arena is used for more than hockey, I have a soft spot in my heart for the Erie Otters. In fact, I got to see Connor McDavid’s last game in Erie, so maybe I’m a little biased.

The Erie Otters are a part of the Ontario Hockey League, so you’ll get plenty of face time with our friendly neighbors over the border. In addition, you might just witness the next big NHL star.

If hockey isn’t your thing, Erie Insurance Arena hosts regular basketball games as well as concerts and other festivities. If you’re still looking for something to do, UPMC Park sits right next door, so you can enjoy your summer nights with some baseball.

In any case, you’re going to have a good time.

When my wife and I were putting together this list, we were trying to recommend places that weren’t too touristy. At the same time, we wanted to share a few places that you might actually enjoy. As a result, we had to refrain from including some of our personal favorites as they’re a bit more niche. This section is dedicated to one of my personal favorite places in Erie.

After growing up on A Day to Remember, Freshman 15, All Time Low, In the Day, Pierce the Veil, The Wonder Years, and so many more, I figured I should at least mention one of my favorite venues: Basement Transmissions (BT)

. With venues coming and going all the time, BT has really stood the test of time in Erie.

BT is basically just a concert hall, but it brings back a lot of great memories for me. A lot of bands pop punk and hardcore bands have passed through BT at one time or another, so there’s a ton of history there. The beauty of the value is that many locals have likely never heard of it, so it’s definitely a niche gem. I recommend visiting if you have the chance.

While we’re here, I should mention that one of my friends back home plays at BT from time to time in his band Mallory Run. Check them out when you have the chance. They’ll appreciate it!

Being from Edinboro, I had to refrain from putting a lot of our favorite places from the county on this list. That said, I can’t stop myself from dropping a few of them below in our list of honorable mentions:

If something you love about Erie didn’t make the list, let me know in the comments. I’m sure there are plenty of other gems that never made the list. In fact, if you have better photos, let me know. For whatever reason, I didn’t take very many photos while I lived in Erie, so I don’t have a ton to a show. Hopefully, the article speaks for itself.

At any rate, thanks for stopping by!