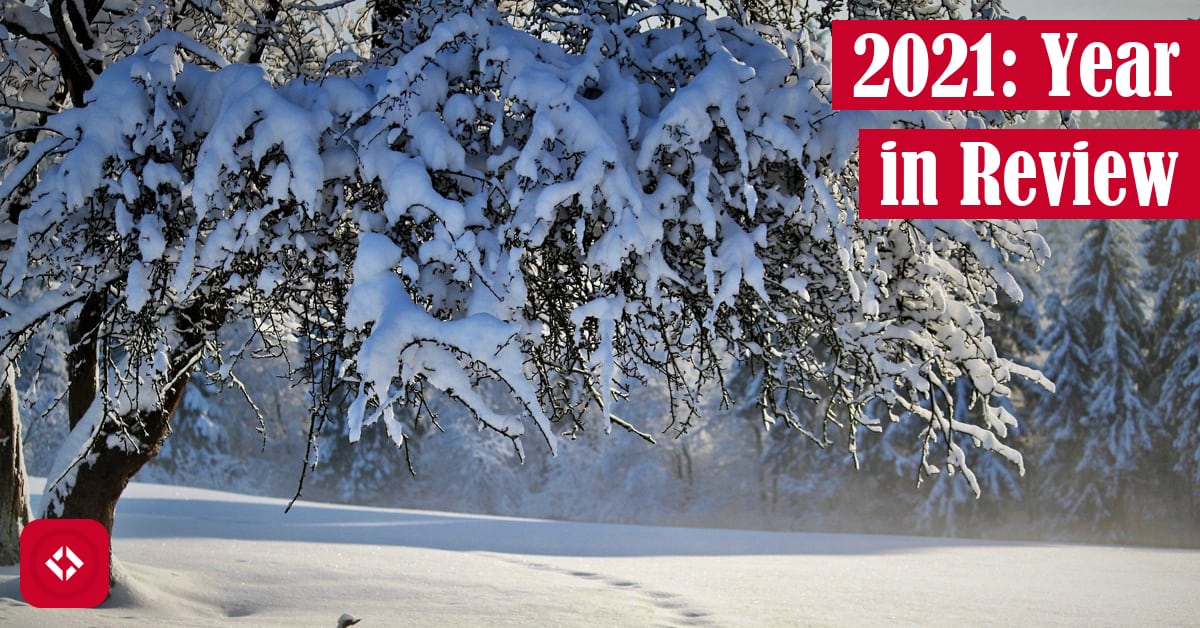 2021 was quite the year! COVID was in full swing. Institutions were in a permanent state of hybrid, and Bo Burnham released a banger of a special. I did some things as well. Let’s talk about them.

For most folks, 2021 was a hard year—myself included. As a result, I’m going to list off just about anything positive that happened as a major win:

Over the span of the year, I’d have to say my proudest achievement is passing my qualifying exam. That said, I think getting the chance to finally travel a bit is the thing I’ll remember the most about 2021. What sort of things did you accomplish? Surviving is a perfectly good answer!

While brainstorming the list above, I thought it would be fun to share some of my favorite photos from the past year.

In here, you’ll find a nice mix of camping photos, pet photos, and nephew photos. Oh and don’t forget that short trip to Florida! I’d love to go down there again.

I don’t remember exactly when I moved from posting twice a week to once a week, but I do know that 2021 was a light publishing year. At most, I wrote 4 articles a month, so putting together this list was pretty easy.

At the moment, I don’t have a lot of plans for future content. I’ll be posting once a week as always, but I expect a particularly challenging semester ahead. As a result, I’ll be going with the flow.

Again, 2021 was a bit of a mess. Of course, that didn’t stop me from working on a bunch of cool and weird projects. Let’s get into it!

has been my baby since early 2018. It’s the first open source project that really took off for me, and I’ve enjoyed working on it ever since.

That said, it’s a project that tends to revolve around the yearly Hacktoberfest mess. Rarely do I get folks contributing to it throughout the year, and I haven’t really heard of anyone using it. So, I have no clue if it’s getting any love.

To no surprise, the past year was yet another sort of Hacktoberfest-only year. That said, I did a lot of cool things around the idea of the Sample Programs repo. For instance, I made a template repo

, so folks can make their own collections.

Likewise, I did a ton of work to extract some of the cooler parts of the workflow. For instance, I automated all of the READMEs. And, I even pulled out the README automation code into its own repo! More on that next.

At various points in maintaining the Sample Programs repo, I thought about ways to automate painful tasks. For example, I found the process of maintaining the READMEs for each programming language to be cumbersome. As a result, I wrote some code to automate them.

As you may know, GitHub READMEs are in Markdown. When I wrote the tools to automate the READMEs, I inadvertently wrote a Markdown generation script. Eventually, I ended up sharing that Markdown code with several of my own repos before deciding to extract it into its own library.

The resulting library ended up being called SnakeMD

. It’s a silly name because what I really wanted was PyMD, but we can’t get everything we wanted. As a result, I settled on SnakeMD which sounds like a snake doctor. Instead, it generates Markdown files for you.

I’m extremely proud of such a simple script because it’s one of the few things I’ve made that I think will actually help folks. And I’m not wrong! I’ve done basically no marketing for it and 8 repos are already making use of it. How cool is that? The wild part is I don’t even know how folks are finding the repo because I can’t seem to get it to show up in Google.

Since we’re on the topic of Sample Programs ports, another library that I put together this past year was subete

. Subete is a silly library, but I kind of love it. It allows me to programmatically browse the Sample Programs repo in Python.

I’ve most recently used this library to automate my profile page on GitHub. Once a week, I post (automatically) a different code snippet from the repo.

I’ve also used the library to generate some pretty plots of data related to the repo. I haven’t looked at these plots in ages, but I imagine they’re cool!

Oh, I’ve also used the library to create a Discord bot that shares random code snippets from the repo. It’s a silly thing, but I love it.

I’ve been tracking data about the site for a long time. These days, I don’t really pay attention to the metrics, but maybe you’ll enjoy taking a peek at them.

As far as page views are concerned, all I can really say is “L + Ratio.” Joking aside, my view counts have definitely dropped over the years. That said, I think they’ve more or less stabilized, which is a positive in my eyes.

I don’t really have any goals for view count in 2022, but I’d be content with keep the site over 10k views a month. That seems reasonable!

I was a bit weirded out with the top pages this year. Surely, the Python stuff stands out. I realize that’s my niche. That said, an article I didn’t even write snuck into my top five, and that does make me sad from time to time.

That said, I am pleased with the spread of top posts. Once again, I don’t really have a single post running away with the view count like in 2019. Obviously, I wouldn’t be opposed to that kind of traffic, but I prefer the stability of the current setup.

There’s no surprise that my top sources of traffic are organic. That said, what I’m most pleased by is the growth of support from other search engines like Bing and DuckDuckGo. With Google, I’ve found that I’ve slowly be falling off. I don’t know why Google refuses to recommend my content, but it’s frustrating. Thankfully, we’re seeing respectable growth from other sources.

Next year, I’d like to see DuckDuckGo and Bing (combined) take over Google. Then, I could finally prove that Google just hates my content.

Not much to say here. My content thrives in English speaking countries.

Despite barely publishing at all over the past year, I didn’t see much in terms of fall off that a lot of YouTube folks describe. Perhaps my content is somewhat evergreen. Let’s see what happens in 2022.

Also, YouTube is nice enough to share a year in review email which included some fun 2021 stats:

Ah yes, the money question! As a quick overview, money was about as good this year as last year, which is saying a lot given the decrease in traffic.

That said, let’s talk about income sources in more detail. Up first is Patreon which has shown a small decrease in support over the last year. That said, I picked up two more folks that I don’t even know, so that’s cool!

While I’m happy with the Patreon income, we have to talk about the Amazon income. Amazon is funny one for me because 99% of it comes from my trombone site which I don’t publish on anymore. That said, it’s still bringing me a fairly decent chunk of change at the end of the year. In fact, it outperformed last year! Maybe I’m in the wrong field.

As you probably know, I’m not a huge fan of ads. That said, they’re a fairly stable way of earning income, so I turned them back on this year. With just a handful of ads on the site (two in the sidebar and two in the footer), I managed to make over $100 in the span of a year. I would not be surprised if that number goes up in the next year.

One last table I like to include is for historical reasons: the membership revenue. Prior to Patreon, I rocked a membership site. That’s long gone, thankfully.

Outside of the big three sources of income (i.e., Patreon, Amazon, and Google Ads), I don’t really have other sources of revenue. That said, I started an official bank account for the site, and I even began investing the earnings. Maybe in the future we can talk about how those investments are going. For now, let’s call it a day.

These days, I try to move one day at a time. Between working toward candidacy and caring for family, I have little time to dedicate to the site. That said, this is one of those things that I’m proud to have said I started and continue to maintain. As a result, who knows what 2022 will bring, but I guarantee I’ll still be here.

With that said, is there anything you want to see in 2022? Let me know!

While you’re thinking about that, here are some of the other review posts for your perusal: